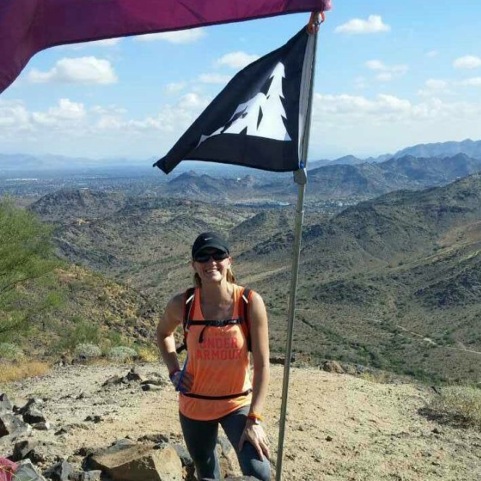 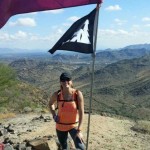 One year after her diagnosis, Melissa completed one of the Phoenix Summit Challenges, which was 4 mountains,18 miles of hiking in 1 day.

Awhile back I received a beautiful message and when I tell you I sobbed like a child while reading it, I am not exaggerating.  I recall my husband looking over at me and witnessed my emotion.  In that moment, I realized just how much this woman inspired me.

I connected with Melissa some time ago and had not realized her battle until she shared this with me, for which I am utterly grateful.  She is really something special and I’m thrilled to share her touching message of mental and physical transformation.  I know you’ll agree, Melissa is a true inspiration and badass!

First, I just can’t thank you enough for being such a huge inspiration in my life! I appreciate your honestly, your humor, and most of all look forward to your inspiring posts.

I have always been athletic, I used to swim competitively from the time I was 7 years old until I was in Jr. High School; and then I took up cross-country and track in my high school days. I wasn’t number one, but I poured my heart and soul into it and I never gave it less than I physically could. Well, until my sophomore year when I was involved in a car accident that pretty much put an end to running.

Looking back, I thought it was because of the injuries that I sustained in the car accident, but the older I got, the more I knew it was because I had given up. I let the actions of the people I was surrounded by (my fellow peers in high school) get to me, I let their negativity bring me down and keep me there for a long time. Why? Because I was a 15-year-old girl, at an all girl high school, and if you weren’t perfect..then what were you? Ha, such a horrible way of thinking to get through high school! Faced with the difficulty of several reconstructive plastic surgeries to repair the damage from going through a windshield, I gave up on the thing that mattered the most to me…running. I was so worried with what people thought of my physical traits, that I let go of the most important thing in my life.

Anyway, several years later, I took up running again, in fact I took on anything that kept me active and that is where I found the piece of me that had been missing for so long. Now, fast forward another few years to 2013, the year I would turn 30. This was my year, the year I decided I would be my healthiest, I’d be in the best shape of my life, would look the best I had…this was my year! I felt like I was on top of the world, physically I was in the best shape of my life ( so I thought), my little family was perfect and we had everything going for us! And then baaaam, just like that, in the blink of an eye, our lives were forever changed when I was diagnosed with Chronic Myeloid Leukemia in September 2013. At first, I was terrified, angry, worried, and above all in disbelief after the diagnosis and then, I became vengeful towards this thing called Cancer; I became determined to defy all the odds, to prove my doctor wrong, and to above all prove to myself that Cancer wasn’t going to beat me, I was going to kick the living BLEEP out of it! So when my body finally started to acclimate to the oral chemo that I would take forever, I got my rear in the gym and discovered a love for lifting weights.

Since August 2014, I have changed my entire why of thinking about health, our way of eating, lifting weights and most importantly I have rediscovered myself and my commitment to being fit! I still have ups and downs, I have good days and bad days; and days where I want to give up; but I don’t because of people like you that have inspired me to be more than I ever thought possible. So thank you, thank you so very much for keeping me going, making me believe in myself, and for giving me the strength to push harder when I wanted to quit! You are my inspiration!”

In following up with me recently, Melissa shared, “Now, almost 2 years after my diagnosis I am stronger than I ever have been, physically, mentally and emotionally. Not to mention, I have reached a major milestone in my leukemia treatment – an “undetectable” level of response. Unlike other cancers, there is no remission with CML, rather there are levels of response. This is because my treatment controls the disease by stopping the production of leukemic cells. My undetectable response level means my treatment is working and my body is not producing leukemia cells. I still have leukemia, however, and I will have to continue taking the oral chemo to keep it under control. My treatment has side effects, which will continue, yet this is an incredible milestone. My journey is not over, it’s more of a signal that I am on the right path. Basically, I am a badass!

My hubby Bryan is my rock,he supports me in every facet of my life, he is my encourager, my shoulder to release my ugly cry into, and keeps me grounded.

I have only just begun my journey into the fitness world and I cannot wait to see what is in store for me. Marathons? Fitness competitions? Triathlons? Who knows, I have no limits!

Thank you for inspiring me and reminding me that I am one bad ass chick!”  Melissa, you are the one who inspires me!!!

Some interesting facts about CML that Melissa shared with me:

– The American Cancer Society estimates that about 6,660 new cases will be diagnosed with chronic myeloid leukemia (CML) in 2015.

– The average age at diagnosis of CML is around 64 years. Almost half of cases are diagnosed in people 65 and older. So you can imagine the shock when the blood test revealed the results.

– Most cases of CML start when a “swapping” of chromosomal material (DNA) occurs between chromosomes 9 and 22 during cell division. Part of chromosome 9 goes to 22 and part of 22 goes to 9. This new abnormal chromosome is known as the Philadelphia chromosome. The Philadelphia chromosome is found in the leukemia cells of almost all patients with CML. The swapping of DNA between the chromosomes leads to the formation of a new gene (an oncogene) called BCR-ABL. This gene then produces the BCR-ABL protein, which is the type of protein called a tyrosine kinase. This protein causes CML cells to grow and reproduce out of control.

For more info on CML, check out the American Cancer Society